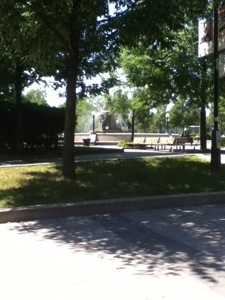 It’s a beautiful sunny day in the east end of Montreal. Perfect for a cappuccino on the terrace. (That’s the fountain/park from the terrace at Premier Moisson)

So a young fellow walks by in a “Rockband” T-shirt and I wonder, what motivated this person to buy and wear such a T-shirt?

Love of the music? A feeling of belonging to a select hgroup? Rebellion?

When I wore branded T- shirts (I still wear one every now and then ) it was my favorite band or musician. But what comes to mind is… the first time I saw a live band and got hooked on… MUSIC!.

It was in my high school back in ’66. It was some of my fellow classmates and other school students.

They played in the auditorium for a school variety show. I remember hearing the opening notes and beat of “Gimme Some Lovin'” by the Spencer Davis Group. And once that signature opening organ intro that swallowed me up. Then during the solo on went the strobe light! The singer and band moved like demons to the groove… and from that moment on I was addicted. I had to have more and I wanted to create music of my own. Music that had a groove, an unbelievable spell on your whole soul, body and mind.

When it comes to music, no one can give it justice with words. Igor Stravinsky once said “if you could explain music with words, you wouldn’t need music”.

When was the first time you recall being infected by music? Do you remember anything in particular that caught your attention?